4.9 Million Followers On Instagram: What You Can Learn From Entrepreneur Gary Vaynerchuk 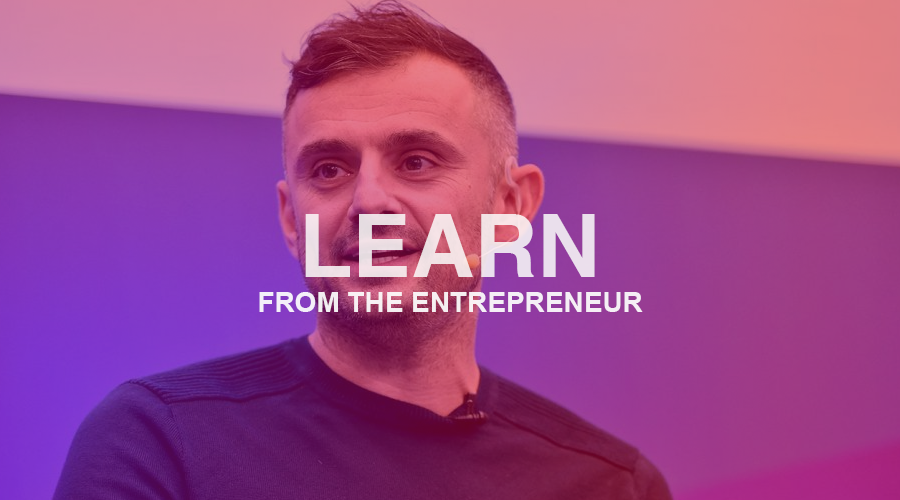 Gary Vaynerchuk is one of the most popular entrepreneurs of today. With almost five million followers on Instagram, and nearly two million subscribers on YouTube, Gary is well-known by successful entrepreneurs like Tony Robbins, celebrities like Logic, and even teenagers and kids. Who would have imagined teenagers watching an entrepreneur like Gary, right?

Gary didn’t gain followers on Instagram out of nowhere. We can easily say that his Instagram gives a lot of value, is very genuine, and still manages to look cool and not cheesy or cliché. Once glance at Gary’s profile teaches you so much, so we’ve complied a list of things you can learn from an entrepreneur with 4.9 million followers and growing.

4.9  million followers on Instagram: what you can learn from entrepreneur Gary Vaynerchuk 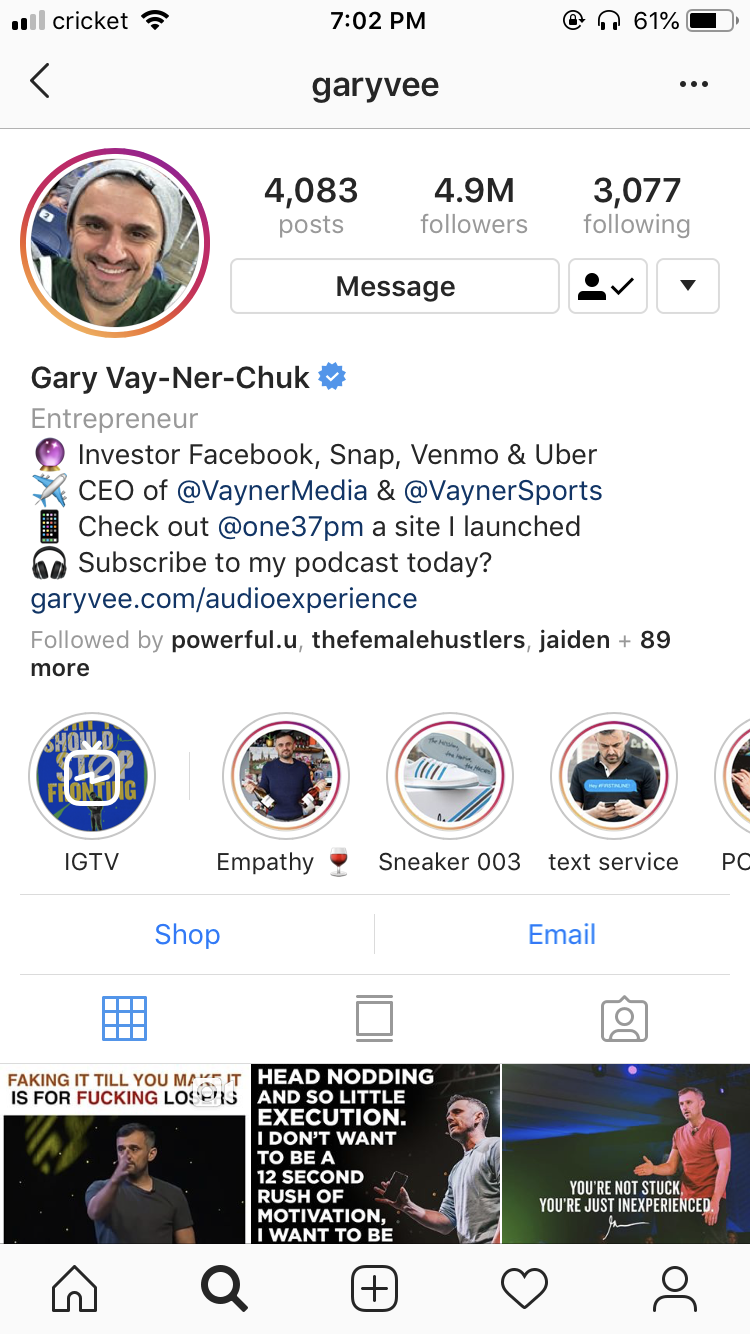 When people follow a business or brand on Instagram, they expect to get value from them. Whether it’s motivational quotes, tips, or behind-the-scenes, they want to see how they can be better by following you. Gary Vee is all about giving free value.

He uploads two to four pictures or short clips every day, goes live on a regular basis, and is always recording Instagram stories. In every piece of content Gary shares, he offers value. He gives advice, motivates people, and helps.

What makes him unique, however, is that he talks about things no one else talks about. His voice and message is unique, and people love to hear what he has to say. And he says a lot. It doesn’t matter that he’s already uploading a lot of content, even his captions are long and value-packed.

He says what he thinks his followers need to hear, asks questions that will receive comments, and it’s all in his voice, which is important, because he writes his own captions.

If you’re going to offer value, don’t make it cheesy. Steer away from phrases like “Nothing is impossible. The word itself says ‘I’m possible’” and “Be happy.” The quotes are overused.

Gary is another person who writes quotes on pictures, but he and his team manage not to make them cheesy. First of all, they don’t use pictures from Unsplash or plain-colored backgrounds; they use pictures of him, usually candids. (Though, there’s nothing wrong with Unsplash photos or plain backgrounds.) Then, they don’t add quotes from other people, they add his own.

People want to see something different. They want to see what you can offer them while making your Instagram posts look cool (or pretty, or badass, or whatever your brand is).

3. Stick to your brand 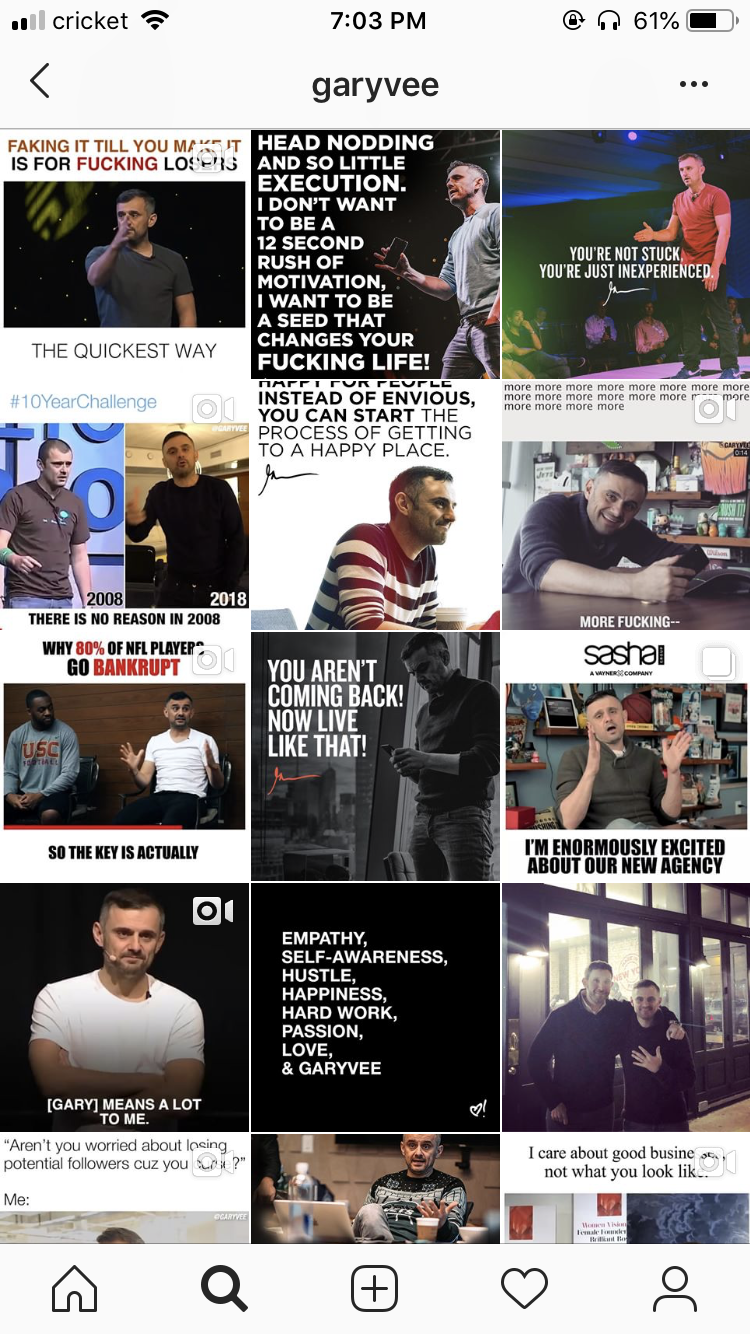 Speaking about brand: stick to it! If you take a quick glance at Gary’s Instagram profile, you’ll notice that nothing seems out of place. He uses the same font, sticks to black, white, and red, is in practically every picture or video, and uses the same logo/signature.

When you look at a Gary Vee post, even if he’s not in it, you’ll know that it’s his post based on the style. That’s what you want for your Instagram pictures. You want people to recognize that the picture is yours without having to look at the top right corner for the user.

Figure out what your brand looks like, and be consistent with your content. Be reliable because most people aren’t fans of change. However, it’s not just about the way your Instagram looks, it’s also about the way it feels.

Yes, the way it looks will make you memorable, but I can pinpoint a quote from Gary because he’s made his tone crystal clear. As in, if I read a quote, I can hear his voice in my head with emphasis and everything. That’s what you want to aim for.

Gary’s hated on by some people because he curses a lot. He also tends to look angry when he’s giving a motivational speech, but he’s not actually angry—just passionate. The point is that there’s also some people who dislike him because he looks like he’s hating on the people he’s trying to motivate.

The magnificent thing about Gary, though, is that he doesn’t care about the people who say that. He sticks to who he is, and he doesn’t apologize for what he does or how he does it. Of course, because of this, there are people who love and adore him (millions, actually). They love how genuine he is, and we all love to follow people who are real.

If you want to be successful on Instagram, there’s one thing you need to understand very quickly: your followers are not stupid. People assume that their followers won’t figure out that they’re not running their Instagram account, but people are a lot smarter than that.

If you’re going to run an Instagram account, be the one to run it, and be genuine. Don’t hide who you are, and don’t apologize. People will love you for you, just like Gary’s fans love him for him.

5. Practice what you preach

There are a million Instagram accounts that give inspirational advice through quotes on pictures, but I bet you that most of those accounts don’t follow their own advice. We’re all guilty of this, but Gary doesn’t give advice or write inspirational quotes that he himself hasn’t applied.

He proves that he isn’t a fraud by constantly sharing stories about what he’s done in his life, what he’s working on now, and even uploads Instagram stories while he’s on the go to another meeting or about to get on a plane. He says “hustle” and he actually does it.

If you’re going to offer advice, then be sure that you have followed it and are continuing to do so. Show your followers, too.